Ubuntu on Windows – The Ubuntu Userspace for Windows Developers 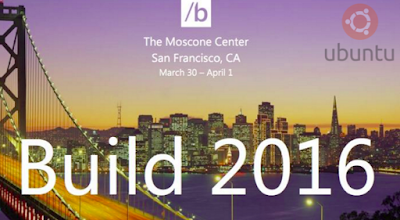 That’s perhaps a bit odd for me, as I hadn’t used Windows in nearly 16 years.  But that changed a few months ago, as I embarked on a super secret (and totally mind boggling!) project between Microsoft and Canonical, as unveiled today in a demo during Kevin Gallo‘s opening keynote of the Build conference…. 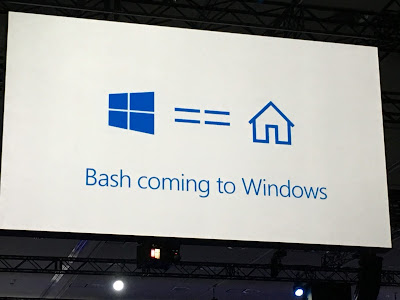 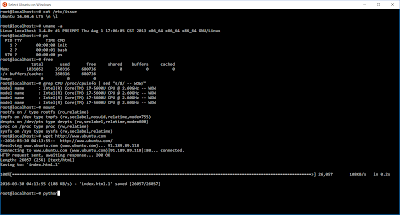 Did you get that?!?  Don’t worry, it took me a few laps around that track, before I fully comprehended it when I first heard such crazy talk a few months ago 🙂

Here’s let’s break it down slowly…

“Right, so just Ubuntu running in a virtual machine?”  Nope!  This isn’t a virtual machine at all.  There’s no Linux kernel booting in a VM under a hypervisor.  It’s just the Ubuntu user space.

“Ah, okay, so this is Ubuntu in a container then?”  Nope!  This isn’t a container either.  It’s native Ubuntu binaries running directly in Windows.

“So maybe something like a Linux emulator?”  Now you’re getting warmer!  A team of sharp developers at Microsoft has been hard at work adapting some Microsoft research technology to basically perform real time translation of Linux syscalls into Windows OS syscalls.  Linux geeks can think of it sort of the inverse of “wine” — Ubuntu binaries running natively in Windows.  Microsoft calls it their “Windows Subsystem for Linux”.  (No, it’s not open source at this time).

So as part of the engineering work, I needed to wrap the stock Ubuntu root filesystem into a Windows application package (.appx) file for suitable upload to the Windows Store.  That required me to use Microsoft Visual Studio to clone a sample application, edit a few dozen XML files, create a bunch of icon .png’s of various sizes, and so on.

Not being Windows developer, I struggled and fought with Visual Studio on this Windows desktop for a few hours, until I was about ready to smash my coffee mug through the damn screen!

Instead, I pressed the Windows key, typed “bash“, hit enter.  Then I found the sample application directory in /mnt/c/Users/Kirkland/Downloads, and copied it using “cp -a“.  I used find | xargs | rename to update a bunch of filenames.  And a quick grep | xargs | sed to comprehensively search and replace s/SampleApp/UbuntuOnWindows/. And Ubuntu’s convert utility quickly resized a bunch of icons.   Then I let Visual Studio do its thing, compiling the package and uploading to the Windows Store.  Voila!

Did you catch that bit about /mnt/c…  That’s pretty cool…  All of your Windows drives, like C: are mounted read/write directly under /mnt.  And, vice versa, you can see all of your Ubuntu filesystem from Windows Explorer in C:UsersKirklandAppDataLocalLxssrootfs 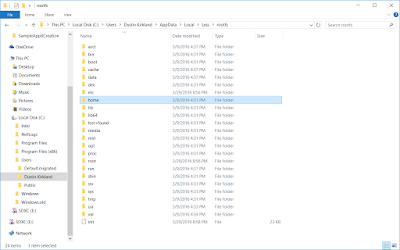 >Meanwhile, I also needed to ssh over to some of my other Ubuntu systems to get some work done.  No need for Putty!  Just ssh directly from within the Ubuntu shell.

Of course apt install and upgrade as expected. 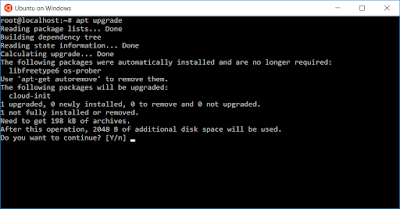 Is everything working exactly as expected?  No, not quite.  Not yet, at least.  The vast majority of the LTP passes and works well.  But there are some imperfections still, especially around tty’s an the vt100.  My beloved byobu, screen, and tmux don’t quite work yet, but they’re getting close!

And while the current image is Ubuntu 14.04 LTS, we’re expecting to see Ubuntu 16.04 LTS replacing Ubuntu 14.04 in the Windows Store very, very soon.

Finally, I imagine some of you – long time Windows and Ubuntu users alike – are still wondering, perhaps, “Why?!?”  Having dedicated most of the past two decades of my career to free and open source software, this is an almost surreal endorsement by Microsoft on the importance of open source to developers.  Indeed, what a fantastic opportunity to bridge the world of free and open source technology directly into any Windows 10 desktop on the planet.  And what a wonderful vector into learning and using more Ubuntu and Linux in public clouds like Azure.  From Microsoft’s perspective, a variety of surveys and user studies have pointed to bash and Linux tools – very specifically, Ubuntu – be available in Windows, and without resource-heavy full virtualization.

Dustin Kirkland is part of Canonical's Ubuntu Product and Strategy team, working for Mark Shuttleworth, and leading the technical strategy, road map, and life cycle of the Ubuntu Cloud and IoT commercial offerings. Formerly the CTO of Gazzang, a venture funded start-up acquired by Cloudera, Dustin designed and implemented an innovative key management system for the cloud, called zTrustee, and delivered comprehensive security for cloud and big data platforms with eCryptfs and other encryption technologies. Dustin is an active Core Developer of the Ubuntu Linux distribution, maintainer of 20+ open source projects, and the creator of Byobu, DivItUp.com, and LinuxSearch.org. A Fightin' Texas Aggie Class of 2001 graduate, Dustin lives in Austin, Texas, with his wife Kim, daughters, and his Australian Shepherds, Aggie and Tiger. Dustin is also an avid home brewer.